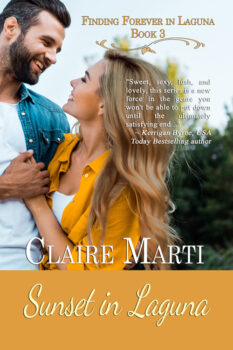 Returning to Laguna Beach after four tours in the Middle East, Christian Wolfe leaves the military behind and buys a wine bar, vowing to keep his life simple. He fights to keep his devastating PTSD a secret and refuses to burden anyone else with his baggage. When stunning Kelly Prescott and her red stilettos saunter into town, she drives him past the bonds of his self-control.

Successful in her father’s stuffy law firm, Kelly’s too compassionate to survive in the cutthroat world of corporate litigation. Leaving behind both family and courtroom drama, she moves to Laguna to become general counsel for a nonprofit veterans’ organization.

She didn’t bargain on a gorgeous modern-day Heathcliff, and in Christian, she sees another kind of challenge—one she can’t resist.

“Scared? Of this? No.” Still, he didn’t bend down to pet the alien-looking object. He didn’t want to encourage her attentions.

Kelly leaned in to pet Olive, and her hand brushed his denim-clad leg. Even through the heavy material, a spark of heat ignited and shot straight up his thigh. Damn. Maybe the dog was safer?

Olive shifted her attention to his other leg and began dancing a little jig. What the hell was wrong with it?

“Come on, Christian. Just pick her up. Poor thing seems to be half in love with you.” Kelly laughed again. “Oh fine.” He leaned down and grasped the little beast by its plump midsection. “What is it? Not really a dog, right?” He held the ten pounds of fur aloft, and it locked its bug eyes onto his. Was she grinning at him? Her pink tongue lolled out of the right side of her mouth.

“Give her a little hug. Don’t just hold her out there.” Melinda’s brisk tone brooked no argument.

Geez. Fine. He snuggled the dog against his shoulder, and he could have sworn she sighed in ecstasy. She laid her head on his shoulder and gazed up at him. Even he could see the worship in her eyes. Figures this ugly little creature would latch onto him. He gave a few gentle pats to the rolls of fat on her back and set her down.

“There. Are you happy?” He glanced at Kelly, who was grinning, looking incredibly gorgeous. He’d much rather snuggle her sexy little body into his shoulder.

“Are you sure it’s a dog? And how could it help a disabled vet?” He directed his gaze at Melinda. Weren’t service dogs usually Labs or other large breeds who could provide physical assistance if needed?

“I’ll tell you. Come on. We’ll let Olive and Howard finish training while we continue the tour.” Melinda headed back toward the metal gate, and they trailed behind her.

Before they could exit the pen, Olive darted out and slammed against his ankles. He peered down, and sure enough she was gazing up at him with stars in her Bette Davis eyes. She hopped and yipped, apparently wanting to be carried. Some service dog.

“We’re about done, so she can follow along with you on the tour,” Howard called with a smirk on his freckled face.

“Great,” he muttered. Olive looked up at him in triumph and marched next to him. He’d probably trip over her and break his neck.

Readers are intrigued right from the very start of At Last in Laguna…Powerful characters and an unusual conundrum plus plenty of hot action make this a top choice read for any romance fan-–Long and Short Reviews.

Out of 5 stars, this is a 6!  Cuddle up in your favorite nesting place, grab your beverage of choice and settle in for one terrific read! A heroine with a spine and a heart; a scarred hero, yummy enough to take home to tend; a darling rescue dog. Who could ask for more? Read this one. It’s a beauty.—Kat Henry Doran, Wild Women Reviews

Sunset in Laguna deals with many real issues normally not addressed in fiction. The descriptions of the characters are remarkable and the world building is so realistic that one can almost smell the salty sea air. Christian and Kelly are very complex individuals who harbor deep issues…Ms. Marti very cleverly makes use of the five senses when describing characters and places, thus making even inanimate objects come to life. –InD’tale Magazine

Romance, Humor, and a Cute Dog! Sunset in Laguna is the third book in Marti’s Finding Forever in Laguna series, but each of these books can easily be read as a standalone novel. I really enjoyed this story. Kelly and Christian are compelling characters who each have issues from their pasts that they are trying to work through in order to move forward. This is a romance, but Marti also addresses issues of veteran’s with PTSD through Christian’s character. Kelly works for a veteran’s non-profit organization, and together Kelly and Christian get involved in a group called Pups4Vets which matches service dogs with returning veterans (this is where Olive the Pug, my favorite character, shows up). If you love romances, this is a great read. If you like your books to have a deeper layer addressing some type of social issue, then this book hits that mark as well. Sunset in Laguna is a quick read and extremely enjoyable. 5 Stars-GSMC Book Review

Other Books in Finding Forever in Laguna Series